This Friday marks the birthday of Anne Frank, who died 70 years ago. If she had lived Anne would be 86 years old today. Just who was this remarkable girl and what made her so important? 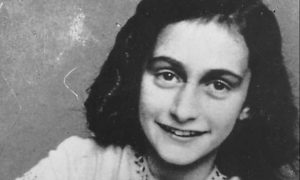 Anne was born on 12 June 1929 in Frankfurt, Germany. She enjoyed four happy years growing up in Frankfurt until the Nazi’s came to power.

She and her family then moved to Holland in 1933 where Anne attended school and showed a talent for reading and writing.

When Holland was occupied by the Nazis in 1940, their background as German Jews put the family under threat. The children could only attend Jewish schools, Anne’s father Otto was not allowed to own a business and they were forced to wear a yellow star and to observe curfews.

On 6 July 1942, Anne, her sister Margot and her parents went into hiding after Margot was called up to attend a work camp. Their hiding place, the annexe, was in the loft above the business. If you want to know more about how this might have felt for the family then why not listen to this clip about our Relative Causes Experience?

Anne wrote a diary which she kept from 12 June 1942 until 4 August 1944. She wrote an incredibly detailed account of the family living in confinement, it expresses her fear, boredom and confusion at the situation she found herself in.

Her diary ends in 1944 when the annexe was raided by the Nazis. Anne and Margot were first sent to Auschwitz and then to Bergen-Belsen where they died of typhoid in 1945.

The appeal of the diary is that it gives a personal account of such a dark time in history and also allows young people to relate to Anne and her struggles with growing up.

Our Relative Clauses Experience is set under Nazi rule. Expelled from school for being Jewish and under attack in your own home, you seek refuge at your neighbour’s. Hidden in the cellar you record the historic events in your diary but no one’s safe in Berlin: the Secret Service track you down and pack you onto a train. In the concentration camp, you find an old school-friend and together you hatch an audacious escape plan… but will it come off?

If you want to find out more you can listen here or book a free demo for your school.