In this blog we have been talking to renowned historian and author S. I. Martin who tells us why it’s so important to keep on looking back as well as how to get children engaged in the subject of the slave trade. 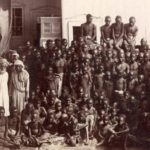 It is so important to keep this history alive. Although these events happened so long ago they have left many visible and invisible legacies. In terms of the built environment several of Britain’s country houses were built on enslaved labour. Schools, universities and hospitals also benefited.

In addition certain aspects of the race relations forged under enslavement and colonialism still influence contemporary attitudes to the subject.

Unfortunately, most approaches to the study of enslavement tend to focus on the experiences of Africans in America, almost to the exclusion of the Caribbean plantation experience, or the impact of Black people in Britain during the time of enslavement. Knowledge of the transatlantic slave trade helps young people make sense of the presence of populations of African-Caribbean origin in the British Isles. It also goes some way to explaining some of the sources of capital that financed the industrial revolution.

History of slavery is  relevant to school children as stories of enslavement in mainland Britain are to a large degree stories of young people in domestic service. Many of these accounts feature elements of escape, subversion or a strong drive towards self-determination. Using real stories of runaways from period newspapers young people can more easily ‘put themselves in the picture’ and relate directly to the extraordinary choices that enslaved people had to make on a daily basis.

I have heard so many personal stories over the year but the one that stays with me is Robert Wedderburn. Wedderburn’s father was a plantation owner and his mother an enslaved woman. Being free he joined the Royal Navy and settled ultimately in Britain, He became very active in British radical struggles as well as the fight for abolition. In 1824 he published a short work – The Horrors of Slavery. He also published and disseminated throughout the Caribbean pamphlets urging the enslaved to rise up against their masters. He was a genuine radical whose messages are still applicable today.

“Let us rise up then, brethren. Let us rise, not with petitions and marches, but with action. For it is demeaning to human nature to petition our oppressors. We need revolution, not reform.”

You can also read more about Britain and the slave trade in his book. Basing its structure on the testimonies of two of our contemporaries, one the descendant of a slave the other of a slave trader, this book reveals the enormous but unrecognised impact the slave trade has had on modern Britain.

If you want children to know more about transatlantic slavery then we have an experience for KS2 pupils. Find out more here.