“Twas the night before Christmas, when all through the house,
Not a creature was stirring, not even a mouse.
The stockings were hung by the chimney with care,
in hopes that St Nicholas soon would be there.”

All across the world, grown-ups and children alike are preparing for the festivities. Whether it’s getting ready to roast a big turkey or decorating a Christmas tree, every family has different traditions for celebrating the festivities. Here at now>press>play we have found the ’12 facts of Christmas’ to fascinate you (and even impress your relatives at your Christmas lunch!) 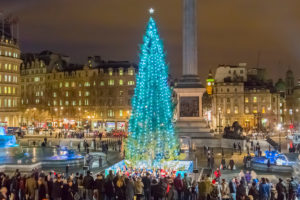 The Christmas tree in Trafalgar Square London is given each year by the capital city of Norway, Oslo.

So there you have it! If you know of any more Christmas traditions from around the globe we would love to hear from you! But for now, may we take this opportunity to wish you all a Merry Christmas and a Happy New Year.

“He sprang to his sleigh, to his team gave a whistle,
And away they all flew like the down of a thistle.
But I heard him exclaim, ‘ere he drove out of sight,
“Merry Christmas to all, and to all a good-night!”.