Home » May Day Around the World! 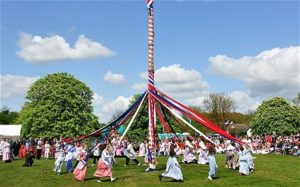 In England, a large Maypole is placed on a village green and people dance around it to celebrate the coming summer.

This Sunday is May Day a traditional pagan festival to celebrate the coming of summer (despite the snow we have been having recently!). Festivities that we now associate with May Day come from the Middle Ages. One the first day of may, English villagers would rise at the break of day to wander the countryside gathering blossoms and flowers.

A tall pole, known as a Maypole would be set up on the village green and villagers would decorate it with the flowers they had collected at the start of the day. To celebrate the coming season, villagers would dance and sing around the Maypole with live music being played. A pretty good party for all! Morris dancing was often also performed by local men, and their costumes would be covered in several small bells. Villagers would select the prettiest girl in the town who would be crowned the Queen of May. Another English May Day tradition, which is still practised in some places across the country, involves a house-to-house visit by children, who bring flowers in exchange for pennies. Once the pennies had been collected, the children would toss them into a wishing well.

So, how about May Day traditions in other country’s?

In Germany and Czechoslovakia it is custom for the boys to secretly plant May trees in from of the windows of their sweethearts. This is said to ensure fidelity and the return of love.

In Switzerland a small May pine tree is often placed under young girls windows to encourage health and development.

In Greece, children rise early and set off to see the sight of the first swallow. When they have found it, they go from door to door singing songs to welcome in the spring. Neighbours will often reward them with treats such as fruit, nuts and cakes.

In Hawaii May Day is called Lei Day and a Lei (the traditional flower garland of Hawaii) is given. The giver must place it around the receivers neck and accompany it with the traditional Lei Day kiss.

In France and Italy, the festival takes more of a religious format with both countries dedicating the festival to the Virgin Mary. Flowers are placed on statues and paraded through the streets. In France, they also tie flowers to the tail of a cow which is then paraded through the town. If you are lucky enough to touch one of the cows it is believed that you will have good luck – so most people will try and touch it if they can! They also milk the cow early in the morning and drink it’s fresh milk as it is said this will bring you good fortune for the rest of the year!

So, if you want to place a tree under your sweethearts window or drink fresh cows milk to bring you good fortune – make sure you do it in the spirit of May Day, with a smile on your face and a spring in your step! Happy May Day, from all of us here at now>press>play