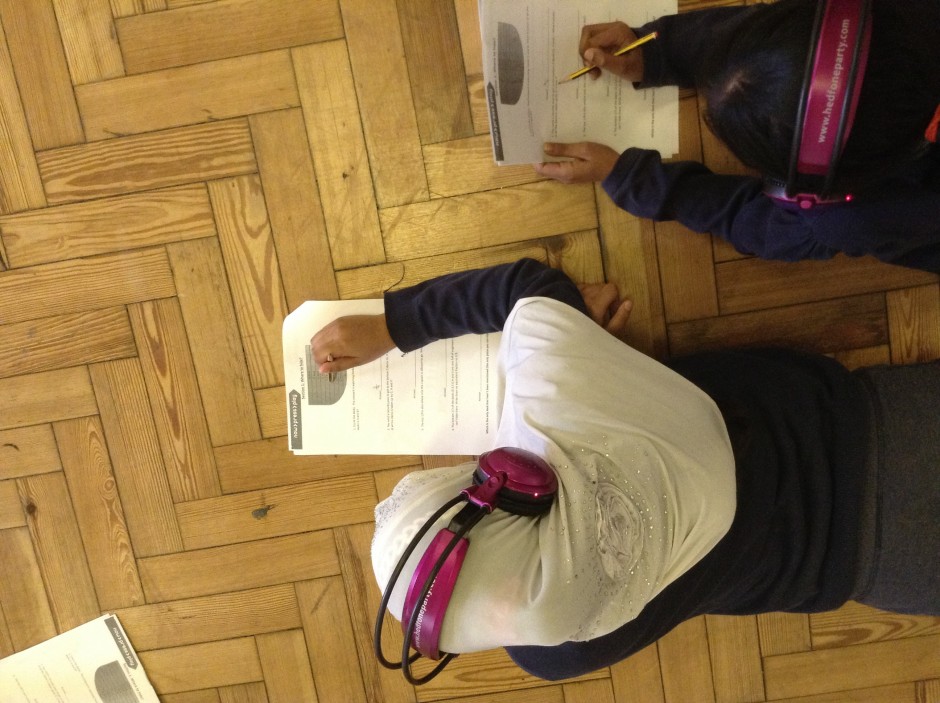 This September, Michael Gove’s 2014 curriculum came into effect. As all schools know, the expectations in literacy and maths in particular have soared, with children expected to be roughly a year ahead of where they were last year.

At now>press>play, we want to help teachers meet the new curriculum head on. So we have developed a literacy series, a four-part experience which focuses on relative clauses and fronted adverbials.

So how does it work?

Every session starts with a mini lesson (for which we provide a simple lesson plan), which introduces the  concepts that the Experience will focus on. The children then put on the headphones and take part in the  Experience. During the story there are three breaks in which they answer questions and apply the concepts  they have learnt. The last part of the lesson is a group marking session where the children can evaluate their  work and identify anything they have got wrong.

The series is set in Nazi Germany in 1939. Expelled from school for being Jewish and under attack in their  own home, the children seek refuge at their neighbour’s. But the Secret Service track them down and pack them onto a train. In the concentration camp, they find an old school-friend and together hatch an audacious escape plan.

The children record their persecution in a diary. Using relative clauses and fronted adverbials becomes integral to the story as they attempt to record, in as much detail as possible, everything that is happening to them.

We piloted our literacy series with two Year 5 classes at Gloucester Primary School in Southwark.

The children responded very positively to the literacy series and looked forward to each session. They were gripped by the story and were emotionally involved in the characters’ journeys.

We tested the children’s ability and knowledge of relative clauses and fronted adverbials before and after the series. Overall we saw an improvement of 17% in the children’s marks.

We visited the children six weeks after the session and they remained positive about the impact of the now>press>play series. One child explained that during a test, he forgot what complex sentences meant and a friend reminded him by whispering ‘now press play’. After his friend had jogged his memory, he remembered how to use complex sentences and was able to complete the test.

Since the Relative Clauses Series, the lower ability children have been using complex punctuation in their writing.  Not only have they understood the concepts, but they’re using them! Emma Grant, Y5 Teacher

Listen to an extract of the Relative Clauses Experience.

This website uses cookies to improve your experience while you navigate through the website. Out of these, the cookies that are categorized as necessary are stored on your browser as they are essential for the working of basic functionalities of the website. We also use third-party cookies that help us analyze and understand how you use this website. These cookies will be stored in your browser only with your consent. You also have the option to opt-out of these cookies. But opting out of some of these cookies may affect your browsing experience.
Necessary Always Enabled

Performance cookies are used to understand and analyze the key performance indexes of the website which helps in delivering a better user experience for the visitors.

Analytical cookies are used to understand how visitors interact with the website. These cookies help provide information on metrics the number of visitors, bounce rate, traffic source, etc.

Advertisement cookies are used to provide visitors with relevant ads and marketing campaigns. These cookies track visitors across websites and collect information to provide customized ads.

Other uncategorized cookies are those that are being analyzed and have not been classified into a category as yet.