This week is Astronomy Week! We asked Astrophysicist Brooke Simmons to tell us a bit about how she got into space. Brooke is one of the scientists who has been working with us on Sound Science, our KS3 Science project with ScienceGrrl.

Most kids who have the opportunity to dream will inevitably dream big. As a child I imagined the usual: being a superhero, seeing real dinosaurs (without being eaten), exploring outer space. I also watched cartoons and played sports and looked forward to the summer holidays; I was a normal kid with a kid’s imagination and sense of wonder.

It’s also fair to say that I’ve always been interested in maths and science, but didn’t know exactly which subject I loved best. Luckily, I was in an environment where I could dream big and learn at the same time. I read books, did labs and projects, and occasionally met scientists who told me about what they were working on and why it was cool. When I was 17, a science project on comets re-ignited my interest in astronomy, and by the time I started learning more about galaxies, I was properly hooked.

Now that I am (or pretend to be) a grown-up, I often have the opportunity to talk to the public about my work as an astrophysicist studying galaxies and supermassive black holes. I work on the Galaxy Zoo project, which has thus far enlisted the help of over 300,000 members of the public to classify images of distant galaxies. We communicate with our volunteers in a few ways, including blogging, tweeting and holding live public Hangouts where we answer questions and talk about astronomy. 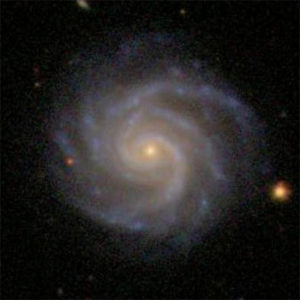 In addition to that, I really enjoy teaching and talking with students about science. I’m a scientist now because I had plenty of support and encouragement back then, and I think it’s important to keep that going. I also think ScienceGrrl is fabulous, so when I heard about the opportunity to be involved in Sound Science, a partnership project between ScienceGrrl and now>press>play, I jumped at the chance and am thrilled to play a small part in it.

now>press>play immerses students in a truly engaging experience that combines real science with imaginative and far-reaching narratives, and that’s what I think we as scientists should be encouraging kids to do: dream big, and learn.