As part of our continued effort to improve our now>press>play experiences, we’ve enlisted the help of pupils from Chisenhale Primary School in Tower Hamlets, London.

Our children’s Advisory board is made up of children spanning the whole school, helping to give us the low-down on how they find immersive learning and how we can increase their understanding of the curriculum.

It was our  first ever meeting with Chisenhale’s Advisory Board and they gave us some really great feedback.  Here are some of their insightful comments:

“It  helped me understand how maths is used in the real world” said Polly, Y4. She’d like now>press>play to make an Experience for “Radius/Angles/Diameters because the Experiences help me to remember.”

Mustafa, Y3, said the day after he did now>press>play he had to “write about it, and it helps me know what’s happening because I imagined it and then wrote about it.”

Lola, Y4 particularly liked “the descriptive language used in the stories” and she’d like to do now>press>play as part of maths and literacy in the morning.

Elsie, Y6, informed us that after her class listened to Ancient Egypt they had to write a report and “it really helped give us ideas and helped with vocabulary.  I think without it, it would have been harder and taken longer, thinking of what to write.”

Sally in Y3, said her class did art work after they listened to now>press>play and it helped her “imagine what to draw.”

Isaac in Y6 thought that “using your imagination to learn is better than just being told something.” 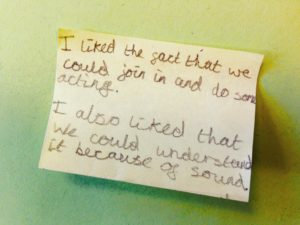 Overall the Advisory Board thought now>press>play was helping them to learn and Helen James, Head Teacher said she thought the impact on the children was  positive and was impressed by their insights into how now>press>play ‘ helped their learning – I was really inspired!”

We’re looking forward to our next meeting where we will be asking the Board their opinion on what curriculum topics they’d like us to do next. 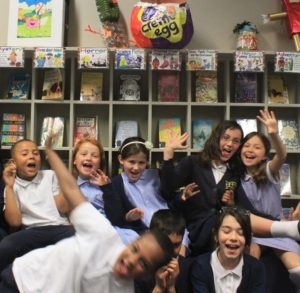